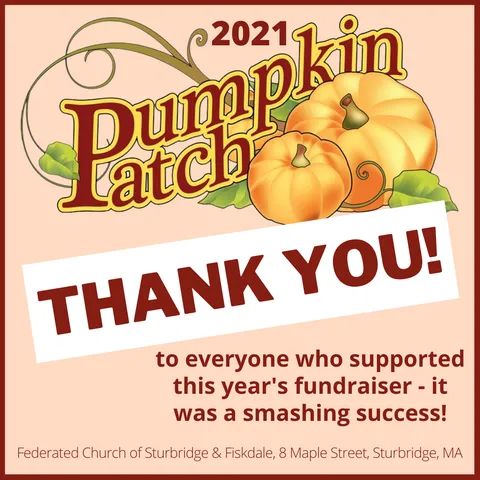 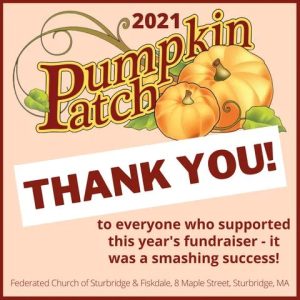 Organizers at the Federated Church of Sturbridge and Fiskdale are busy putting the final touches on this year’s 4th Annual Pumpkin Patch Fundraiser, which is slated to open on Saturday, September 25 on the front lawn of the church at 8 Maple Street, Sturbridge.

According to committee chair Tom Mapplebeck, the annual fall event made its first appearance in 2018 as a fundraiser that benefits church operations and numerous regional ministries, with a significant benefit going to the Navajo Nation in Farmington, NM where Pumpkin Patch Fundraisers employs over 700 Native Americans during the harvest months of September and October. They also have a full time off-season NM staff that is comprised of entirely Native Americans. This has a positive and lasting impact on a region with 42% unemployment.

“Now our Pumpkin Patch has become so popular that residents from Sturbridge and surrounding towns look forward to the arrival of the tractor trailer truck that delivers the pumpkins and gourds from New Mexico and the activities that follow throughout the month of October,” Mapplebeck adds.

Once the pumpkins go on sale, volunteers from the Pumpkin Patch Committee and other church and community members will be on hand to assist with sales Monday through Friday, from 10 a.m. to 5 p.m. and on weekends from 9 a.m. to 5 p.m. weather permitting. Masks may be required depending on current Massachusetts guidelines.
Mapplebeck says the committee would welcome volunteers from other local community groups to help unload the initial order of pumpkins when they arrive at 8 a.m. on Saturday, September 25. Additional volunteers are also needed to help with sales whenever the Pumpkin Patch is open to the public.

This year’s Pumpkin Patch Committee is also hoping to schedule an array of different pumpkin-inspired events and activities throughout the month of October, including a pumpkin carving demonstration by Roger Williams Park Jock-o-Lantern Spectacular carver Simone Germaine on Saturday, October 16 from 10 a.m. to 1 p.m. and another demonstration the following day with local artist Heidi Curboy. “We’re proceeding a bit cautiously scheduling others at the moment,” says Mapplebeck. “We’re keeping a close watch on what’s happening with the Delta variant and the local healthcare scene. Naturally, we want to be sure we can conduct the event in as safe a manner as possible.” More scheduled events will be announced closer to the opening of this year’s Pumpkin Patch.

Pumpkin Patch Fundraisers began in 1974 in North Carolina with 3 acres of pumpkins and a partnership with one church. They agreed to let the church sell the pumpkins and they would share the proceeds. There was no contract, no legal proceedings…just a handshake and trust in each other. Richard and Janice Hamby have been growing pumpkins and adding partners ever since.

It’s a wonderful partnership of trust. Over 1,000 churches and non-profit organizations, including the Federated Church of Sturbridge and Fiskdale, trust Pumpkin Patch Fundraisers to grow and deliver 1,200 acres of great, hardy pumpkins, and they, in turn, trust those organizations to be diligent in selling their pumpkins, honest in reporting their sales, and attentive to paying a percentage of sales toward all of the costs associated with growing, harvesting and shipping.

For additional updates, please go to the Sturbridge Federated Church Facebook page, visit the Church website at sturfed.org, or call the Church office at (774) 304-1021.

Coming Up At The Meetinghouse

VERSE OF THE DAY